A Designer’s Critique of Newsom’s Apartment for Sale

My blog entry this morning was supposed to be how to spend a lovely day in Half Moon Bay, drawing from my great excursion on Saturday (the entry is still forthcoming for those who care).  But as I fired up the computer and entered the blogosphere to write my entry, one topic that was burning up the lines caught my eye: Gavin Newsom’s penthouse apartment was for sale.  Better yet, there were lots of pictures of his abode, which has been described as the “ultimate bachelor pad.”  While the SFgate.com article (http://www.sfgate.com/cgi-bin/blogs/ontheblock/detail?entry_id=39171) has pages of comments that are highly personal and political, they were few informed and cogent comments that addressed the apartment’s interior design done by Michael Agins (http://www.comzen.com/agains/index.html).  While the general public online has universally panned the Newsom apartment, I wanted to provide my own, “more objective” take of his space for those who care about design.  My one-line summary about the apartment: it’s a nice, well laid-out but uninspired space whose repetitive tonal color scheme and cramped quarters make it hard to justify the $3M price tag.

Let’s start with the basics: Newsom’s apartment is 1101 Green St. #2201, a one bedroom one and half bath penthouse apartment in the Bellaire Tower on Russian Hill, at the corner of Leavenworth and Green.  Built in the 1930’s originally but “stripped to the studs” and remodeled by the Newsom recently, this apartment has unsurpassed Art Deco provenance and “three-bridge” views.  While the square footage is not listed, based on the floor plan, my guess is that it is about 1500-1800 square feet.

Looking at the floor plan, I actually like the way the space was laid out.  From the entry, off which is the powder room, you see the impressive great room and fireplace straightaway.  From the great room, the house splits symmetrically into two wings: one that houses the dining room, kitchen and laundry, and the other that holds the study and bedroom.  What I like about the design the symmetry and open layout, considering that the building is more than 70 years old.  The main drawback of the layout is that the laundry room is buried at the furthest possible point away from the bedroom closet, and the entering the bedroom requires traversing through the study.  While both these drawbacks maybe bother most, how much laundry does someone do themselves who can afford a place like this?  The layout is a bit self-indulgent as a one bedroom, but as trophy property / bachelor pad it’s perfect. 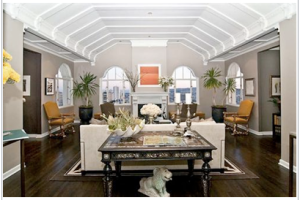 Living Room from the Entry

The great room is clearly the piece de resistance of the apartment.  It’s the largest room, as well as the room with most windows, highest ceilings and best views.  The barrel ceilings with the original trim are a nice touch, though personally I would have chosen another color (like a dark brown) to bring out some of the details like the beams.  Speaking of brown, it’s here that one begins to see this color time and time again.  I actually don’t mind the color here; the problem lies when you start seeing  this color or a different shade of it in each and every room – seriously!

Back to design, I like the way the living room is laid out – again very symmetrically.  What I notice is the abundance of seating from the sofa to the two sets of armchairs to benches under the windows (Florence Knoll upholstered in a golden leather I believe).  Given that Newsom probably entertains a ton, it makes sense to have a lot of seating for guests and I think the designer did a good of incorporating it into the design.  Online, the public has criticized the Moorish / Moroccan influenced carpet.  Personally, I like it and thinks it adds a bold, graphic, modern element to the room.  In fact, I used a similar style carpet from West Elm for one of my previous projects – hmm, maybe that’s a bad thing… 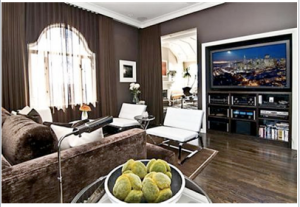 Adjacent to the living room is the family room, which really looks like a well-disguised media room.  In the first picture, note how the drapes slide behind the crown-molding to hide the media center.  In the second picture you see the media center (with 60″ plasma?) in all is glory with the drapes pushed to the side.  Very slick.  This is probably the best design trick I see in this apartment; a great way to hide the TV from Jennifer / wives / girlfriends when you’re not watching it.  Come to think of it, this might be Jennifer’s screening room to watch herself in her own movies – she is an actress you know …. I also like the very modern leather arm chairs the designer chose here (they look like they might be Minotti?).

As a we go into the dining room, there’s nothing special about this fairly narrow room.  In the back, you see part of the open kitchen and the island with counter seating that separates the two rooms.  Of note is that there is no chandelier in this room.  My guess is that the designer thought it would make the room feel too small, and or did not want to offset the chandelier over the table because of the “aisle” that leads into the kitchen and laundry room.  Starting with this room, the brown starts to become heavy handed…

The kitchen in this apartment is quite nice. You have your requisite Sub-Zero and Viking appliances and Calcutta marble counters.  The counter seating is highly functional and where most casual meals are held is my guess.  I like having the sink facing the dining room and the stove tucked away in the back so the smoke and grease are kept further away.  What I think is not great is having the refrigerator way back there – a long way to go to grab a snack.  Also interesting is the lack of upper cabinets along the back wall of kitchen; instead the designer specified another Moorish-influenced built-in bar to hold liquor and glasses.  I have mixed feelings about this approach.  While I usually like custom features like this, particularly since you can usually save some money building something like this versus buying expensive cabinets, I question the Moorish styling and the lack of storage in this kitchen.  I would imagine that one would need or want more storage for things like plates and pots (maybe it’s all kept in the pantry area?).  Of course, how important is functionality when you have two wine refrigerators in small kitchen like this?  Come to think of it, the whole back wall of this kitchen is dedicated to liquor!  Quite the bachelor pad indeed…

Adjacent to the living room on the other side is the tiny study.  When I saw this picture, the tonal brown color scheme really began to bother me.  This lighter brown color that the designer chose mixed with the neutral, blase furniture choices makes the room look so drab, especially in this daytime photo.  One missed opportunity to me is clearly the built-in bookshelves along the back wall.  Could the designer not have chosen a contrasting color treatment or even plain white so the book and art pops more?  Better yet, how about a graphic wallpaper, glass, stone, tile – something please… maybe even a matching Moorish built-in like the kitchen?  The only thing I do want to commend is the built-in, wall-to-wall desk – it’s a great way to get a lot of work space without placing a big desk in the middle of the room.

As you pass the study, you enter the bedroom – or as they say “where the magic happens” (insert your own jokes here – again, I am trying to objective here people).  For Newsom and Jennifer’s sake, let’s hope they have a lot of their own magic, because they are certainly not going to be inspired by the room (though there is a wall mounted plasma across from the bed so…).  This room is pretty conventional and looks like a spread out of Restoration Hardware or Crate & Barrel catalog, though even they would have chosen some artwork for above the headboard.  The best part of the room for me is the geometric carpet and that ain’t saying much.  And if I see that color again I am going to…. 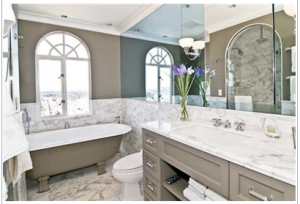 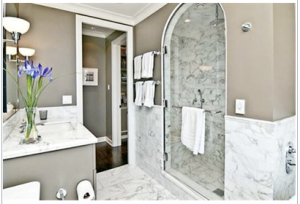 The en suite bathroom is nice if not generic.  We see more Calcutta marble and a cute clawfoot tub.  But why in heaven’s sake is the exterior of the tub painted that same damn taupe color like the walls, like the cabinets, like everything else!  Imagine if this room was the same materials but just all white – it would have an oasis, an oasis from the brown if nothing else.  Also, I would have made the entire shower glass to open up and modernize the room.  I am not sure why they needed to frame it in like they have?  The whole bathroom feels a bit claustrophobic to me…

Last but not least is the powder room – yawn… While the re-purposed chest of drawers turned sink base is something interesting, it and the mirror are just way too traditional for me.  This room is just  so uninspired.  To me, powder rooms are one of the most important rooms in the house because they are rooms guests will almost certainly see and experience, especially in an entertaining space like this.  That’s why I usually spend a good deal of time and money into making them special – they are frequently the first impressions guests have of your home, and you know what they say about first impressions.  For the price of this apartment, I expect more for the powder room, a lot more.

So that’s it – Newsom’s $3M apartment that can all be yours.  Is it worth $3m?  It’s hard to say, especially in this economy but people are known to pay a lot for provenance, and is there greater provenance in San Francisco than our star mayor’s own personal residence?  For a man who’s got 316,370 people following on Twitter, I think he might have a decent shot of selling his place and moving to Marin as the blogs suggest.  And if it sells, I would be interested in talking to the new buyer about a few ideas I have for the space…

Designs for Modern Luxury is a blog by Karman Ng, principal of Cantilever Design, an award-winning interior design firm located in the San Francisco Bay Area. Always reading, researching and reveling in “the best of design” for himself and his clients, Karman began his blog as a way to share his thoughts and finds-from furniture to fashion to food. Karman hopes his blog fosters dialogue and sharing of design-related products, news, tips, ideas and secrets so that everyone can enjoy a little bit more modern luxury in their lives. For more information about Cantilever Design, visit http:///www.cantilever-design.com or follow Karman at http://twitter.com/karmanng.
View all posts by Cantilever Design →
This entry was posted in Uncategorized and tagged Bellaire Tower, Gavin Newsom, Interior Design, Michael Agins. Bookmark the permalink.