Posted on August 4, 2010 by Cantilever Design

Of all the wine country towns in Napa and Sonoma, Healdsburg is probably my favorite.  It has the best mix of retail, restaurants and hotels, while still maintaining that quaint, town-like feel.  While St. Helena comes in a close second, thanks to Martin, Woodhouse Chocolates, Footcandy, Napa Valley Vintage Home, and of course Dean & Deluca, Healdsburg feels a bit more undiscovered and understated.  Actually, the shopping is probably not as good as St. Helena, but the eclectic mix of generally high-quality stores framing  an old-fashioned town square just feels right (in contrast, downtown Sonoma and its square is sparse, touristy and surprisingly downscale).  Shops, restaurants and hotels like Cyrus Restaurant, Duchamp Hotel (personal fave), 14 Feet, Oakville Grocer, and Boisset Wine Bar (more on that in another blog) are my favorites.

For many years now, Hotel Healdsburg has been the grand dame of the square, and really the town, in large part due to its celebrity chef-owned restaurant Dry Creek Kitchen (Charlie Palmer).  Of course the swanky, sleek architecture by David Baker + Partners, white glove service, and premium location overlooking the square didn’t hurt either.  So with the formula to creating a successful hotel down pat, the owners decided to create another down the street – the h2hotel.

The h2hotel (I assume the 2 is for being another “H”ealdsburg hotel as well as being the second one for this company) is similar yet different to its older “sister” in many ways.  They are similar in that they share the modern David Baker architecture, indoor/outdoor lobby-level restaurant and generally upscale, boutique philosophy .  But the h2hotel is slightly different in that it commands a less premium location at the beginning of Healdsburg Avenue off the square, is smaller (only 36 rooms), and is a bit less upscale (rooms start at a mere $195 versus $275, in the off-season mind you!).

Being a new hotel in wine country, it’s no surprise that the h2hotel is an environmentally friendly hotel, “striving for” (aka: not yet certified) an impressive LEED Gold certification.  According to its website, it has green features like: solar heating, a living roof, innovative heating and air systems, an underground cistern for water collection and construction using sustainable and local materials (for example, I think the bathroom tiles are Heath Ceramics from Sausalito, another fave).  Another green and practical idea that I saw was cute lineup of gleaming white Public Bikes (this is of course Rob Forbes’, the founder of DWR, new bike start-up) at the front of the hotel for hotel guests to borrow, presumably to cruise around town, or for those more daring or athletic, to cruise to the nearby wineries (yes, Solage has bikes too but not Publics!).

The exterior of the hotel is probably its weakest part from a design perspective.  It looks very bloated, generic and simplistic compared to the Hotel Healdsburg, which has a formal elegance about it, despite its modern and fairly minimal take on traditional architecture.  How much this has to do with the siting, the construction budget and the “brand” (meaning it’s supposed to look less expensive because it is) I don’t know, but the two properties certainly have different vibes about them.  The Hotel Healdsburg feels darker, richer, roomier and swankier, which is all true by the way.   The worse offense to the exterior are the hideous guest room balcony rails, which look like laser-cut Corten in an organic, branch-like pattern.  The oxidized look is consistent with other details in the hotel, but the overly ornate nature of the pattern bothers me – like something made by a hippie artisan for sale at the Berkeley Flea Market.  I get trying to bring an organic element to the clean, straight lines but I really think that pattern and approach doesn’t work here.

Another example is the poorly poured concrete job throughout the hotel on the outside, and the inside for that matter.  For most upscale buildings who have exposed concrete walls, great care is used to build exacting forms so that the resulting concrete walls that come out of the mold look smooth and precise.  The walls in the h2hotel are “rustic” to be generous – as you can clearly make out the imprints of the rough-hewn 2″x6″ or 2″x8″ planks that were used to make to use the forms.  Again, this could be because of decisions to be consciously rustic, budget conscious or both.

As you get a bit further in however, the building’s promise starts to emerge.  The hotel’s entrance is tucked away off the street, in an interior courtyard, allowing visitors a bit of respite from the bustle of the sidewalk.  As you walk toward the huge, candy apple red entrance doors, across from the line of Publics, is a nice, calming water feature made out of spoons that cascade water down the metal grating, an homage to the “Spoonbar” restaurant behind it.  Above the entrance doors is a novel rain canopy – frameless plate glass precisely perched on an oxidized I-beam.   I love how simple this canopy is and how it creates a true floating roof look. 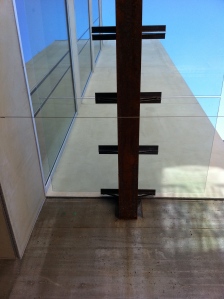 Once you enter the hotel, you immediately notice that this hotel is organized a bit differently.  Directly in front of you is a long, bowed counter that serves as the front desk, concierge and hotel bar.  I like continuous forms so a part of me likes the casual, multi-purpose, one plane-ness of this idea a lot.  But, the androgynous nature of the front desk bothers me.  I think they should have placed some sort of screen behind the desk to frame and formalize the desk a bit more – I think the current way makes the front desk people look like too much like cafeteria workers manning their stations, especially since the desk does segue into the bar.

To right of the front desk is the quaint (rather small) lobby lounge, replete with all Roche Bobois furniture, including my favorite Mah Jong sofas. To partition the space from the vast front desk/bar area is a custom steel bookcase and self-serve water bar.  The all-glass back wall of the lounge overlooks the pool at the back of the hotel.  Providing some privacy to the pool guests is another matching steel bookcase that houses curiosities.  Though the voyeur in me enjoys the pool view, if I were a guest at the pool, I would appreciate a bit more privacy but maybe that was in the intent – to be provocative.

In fact, look no further than the lobby level bathrooms as another example.  These bathrooms share a unisex sink area, a la my beloved Pastis in New York (the first place I saw this done years ago).  Personally, I think this idea is very cool, definitely a bit edgey and irreverent, while being quite practical in terms of reducing the amount of area and fixtures required for bathrooms.  Beyond the concept, I think the bathroom is very well done, and of one of the best designed spaces.  There actually isn’t much too it: concrete trough sink, ceramic tile walls, downlighting, slab mirrors and farmhouse faucets.  But, the total effect is beautiful in its simplicity, though much thought went into the design, such as the right type of tile to provide enough texture, the right type of lighting to highlight the wall, the strategically placed mirrors to allow focus on the walls, and the rustic faucets (for brand and for budget).  And by the way, for those who are worried, the toilet compartments are marked for men and women and feature solid, full height, locking doors (with a glass transom along the very top). 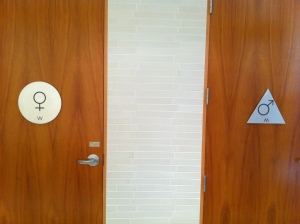 Aside from the front desk, lounge and bathrooms, the rest of lobby level (minus meeting rooms) is dedicated to the Spoonbar Restaurant, which rules the roost.  The restaurant design is a nice and minimal: solid cherry tables with upholstered indigo blue chairs atop polished concrete floors surrounded by walls of either glass, concrete or the outdoors.  The floors and drop-ceiling, clad with wood boards with “randomly” spaced slots for recessed lighting, are carry-overs from the lobby area.  So the look between the two spaces is continuous and integrated, although a bit one-note for me.

Of note in the dining room are the now de rigeur communal, raw-edged, slab hardwood dining table, and the nice bright yellow floral art installation against the “rustic” concrete wall.  One thing that I saw that immediately grabbed my attention was the raw-edged slab hardwood “chandlier” centered over the communal table.  I had never seen slabs like that placed on their edges and hung from the ceiling – “what a great idea!” I thought.  But, believe it or not, these were not chandeliers because they never lit up while I was there?!  But how could they not be because it would be perfect to drop a few low-voltage units inbetween the slabs for some nice, focused downlighting.  The hotel is only three weeks old so maybe they didn’t get to it yet, but this seemed like potentially a huge and obvious miss to me.

Adjacent to the dining room and enjoying street frontage is the bar portion of the restaurant, overseen by world-famous “mixologist” Scott Beattie, formerly of Cyrus.  The bar is pretty minimal as bars go – no flashy LED lighting, floating glass shelves, or dramatic wine archive – though it is consistent with the look of the rest of the hotel (including another one of those wood “chandelier” type things).  The best part of the bar design is the Nanawall doors that open up the bar to the street.  The indoor-outdoor concept is not novel at all, but affixing a long steel beam along the entire length of the opening and topping it with a cherry counter to form a perch and drink bar is.  This simple idea creates a sleek, slim and functional divider between the patrons and the public; the tiny strip of succulents along the bottom is another line of demarcation and a nice touch, though I question their longevity with people undoubtedly trampling them.  I also liked the Eames fibeglass dowel leg stools – I actually didn’t know these existed exactly but they seem genuine enough.

In the end, I liked the space and my meal very much at Spoonbar (it helped I got the only table on the sidewalk, perfect for people watching or noticing the built-in heat lamps set flush into the eave – nice).  Despite some of the details that I question, I think the space is well done, and fits the bill for its aim: providing a modern, boutique hotel experience in wine country geared toward a slightly younger, hipper audience than its sister property, who is intent on retaining the title of grand dame of Healdsburg. 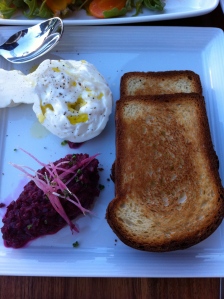 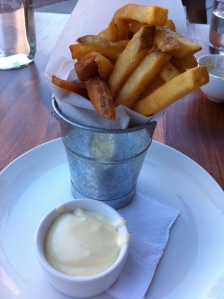 Designs for Modern Luxury is a blog by Karman Ng, principal of Cantilever Design, an award-winning interior design firm located in the San Francisco Bay Area. Always reading, researching and reveling in “the best of design” for himself and his clients, Karman began his blog as a way to share his thoughts and finds-from furniture to fashion to food. Karman hopes his blog fosters dialogue and sharing of design-related products, news, tips, ideas and secrets so that everyone can enjoy a little bit more modern luxury in their lives. For more information about Cantilever Design, visit http:///www.cantilever-design.com or follow Karman at http://twitter.com/karmanng.
View all posts by Cantilever Design →
This entry was posted in Uncategorized and tagged Cyrus Restaurant, David Baker + Partners, Duchamp Hotel, h2hotel, Heath Ceramics, Hotel Healdsburg, Mah Jong Sofas, Pastis Restaurant, Public Bikes, Roche Bobois, Scott Beattie, Solage, Spoonbar. Bookmark the permalink.